Marieke Peeters, one of this year’s nominees in the Painting category, is an artist who combines installations and performances. Her work is surprising and exciting, but also has a dark edge to it…

“Sometimes people tell me, ‘You look so friendly, but your work is so dark’,” says Marieke, whom we visit in her studio in the Heesterbuurt in The Hague. She herself thinks it isn’t as bad as all that. “There can also be beauty in the darkness of daily reality.” She likes pushing boundaries. Pointing to a piece of fur she explains: “That feels nice and soft, but below the soft surface there are rugged scars, which give the material a kind of ambiguity. It makes the viewer uncertain about how to relate to it.” 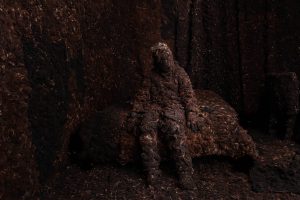 This is something she plays with in her installation Between Whispering Walls, which is based on her childhood bedroom. “My memories of that room don’t correspond with what I see now. The places we’re familiar with can also be very elusive.” Marieke recreated the room in wool. The exterior doesn’t give the viewer any clues about the room’s interior. “The interior is dark and completely covered in a soft dark-brown woollen fabric. People think they’re alone and then they discover there’s someone else present, wearing a woollen costume. I work with a regular group of performers who find my work attractive.” The confrontation with that person in the room caused some visitors to panic. “Some just ran out screaming, but there were also visitors who thought the room was meditative. Because of the thick woollen walls, you only hear the people outside whispering,” Marieke explains.

She sees the violent reactions to her work as a kind of compliment. “It’s also quite special that my work arouses such intense reactions. I noticed that visitors often went back to the room after a while, because it had excited their curiosity.” She was also frequently told that the installation evoked associations with the pandemic when many people were more or less confined to their rooms.

A bathtub full of chocolate pudding

Marieke is currently finetuning another installation cum performance, which had been part of a group exhibition at The Hague art platform Nest of work by students of the master programme Artistic Research at the Royal Academy of Art. In a bathtub filled with a tar-like material a performer, Marieke’s own mother, sits playing with the black substance. “In fact, it’s chocolate pudding,” Marieke explains with a big smile. “I wanted to experiment with liquid material and this pudding gave a syrupy effect. The work isn’t finished yet. I want to make a video of it and involve more performers so that they can interact.” This work, too, looks rather scary with the dark, grisly figure in the bathtub. “I really do like horror movies, but at the same time I don’t see my work in that way.” Her love of film did inspire her to experiment with this medium, though. “In addition, I find installations and performance a very exciting combination. An immersive installation, like the woollen room, allows you to completely enter another world. It’s a very powerful art form.” 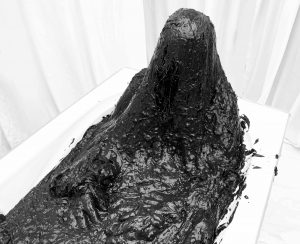 Marieke often uses second-hand materials in her work, for instance old curtains from the charity shop. In the untitled work she made with them you can discern a human figure behind the fabric. “It’s something like playing behind the curtain as you did when you were small, but,” she realizes, “it may also evoke completely different associations.” She finds it really interesting when people use their own imagination.

Grandpa Hans was the one who lit the flame of art in Marieke when she was still very young. “He could make beautiful things out of nothing, like airplanes from bits of paper. He encouraged me to unleash my imagination.” Marieke’s grandfather was an art teacher who, like his granddaughter, was trained at the ArtEZ academy in Arnhem. “He’s very proud of me and I feel I’m following in his footsteps, although we don’t always agree about art matters,” she says. There are sketches of her work on the walls of her living room/studio. “These days, I only draw in order to visualize my work.” Marieke, who is from Doetinchem, moved to The Hague last year. She needed a change of scenery. “I wanted to further develop myself at the KABK, especially to improve the way I talk and write about my work. Besides, The Hague has great art initiatives and institutions. Sometimes it’s good to leave your bubble for a while.” Marieke also did residencies in Zaandam and in the Italian city of Biella. “I hope to do more residencies in the future. It gives you loads of inspiration.”

This summer our nominee has an exhibition at Het IJzerblok in Rotterdam at the end of July. In addition there are plans foran exhibition in Cork (Ireland). Marieke was delighted to find that her work had drawn the attention of the Piket Art Prizes jury. “I hardly did any exhibitions in The Hague and still have to find my way in the local art scene. I think it’s great they saw things in my work that I hadn’t yet seen myself,” says Marieke.