Award 2018 Joep van Lieshout: The picket as a stepping stone

The award for this jubilee year was created by Joep van Lieshout. He must have thought that, after five years of Piket Art Prizes, it was high time we had a picket (as in ‘picket fence’; ‘piketpaaltje’ in Dutch).

Van Lieshout is best known for his several-metres-high, sometimes quite provoking sculptures, including Big Funnelman, on the A27 near Breda, de biogas installation De Technocraat (The Technocrat), and Domestikator, which was refused by the Louvre and subsequently embraced by the Centre Pompidou.

For the Piket Art Prizes Joep made four bronze pickets and six aluminium ones. At first sight, the awards look like painted wood, but appearances are deceptive, and it’s mostly the form that deceives us – they are really made of bronze and aluminium. According to Joep, this form is symbolic: “Pickets are used as markers in border areas. For many of these young artists this prize is a stepping stone, an encouragement to keep you going.”

‘Blow people off their feet with your work’

When it comes to the business aspect, van Lieshout has a warning for young artists: “There is only one important thing, and that’s making good art.” If you know you’re not an entrepreneur, find someone to help you. Don’t sign up for a management or a marketing course, Joep says. “There’s only one goal: to blow people off their feet with the quality of your work.”

Van Lieshout advises young artists to look for complexity – it stimulates creativity. “I always make things difficult for myself. I always want more than the financial or technical circumstances offer.” Don’t hesitate to dig your own well. “That is your creative motivating force. Be happy to have a well to dig. It’s not about the result, but about the road towards it.”

Van Lieshout hopes that winners and nominees will follow their instincts. “Even when everything points to the contrary: do it! Art is about intuition and translating this into a product. When, in the late 1980s, I started to make series of furniture, people said, ‘this is a dead end, this isn’t art.’ But I just did it, and in the end it turned out really important. Don’t follow trends, then you’re too late! Do the opposite! That’s what I did , too: react against it.”

Van Lieshout was in the news recently because of his collaboration with the American artist Kanye West (Ye). “In any case, it will not be about music,” van Lieshout said on Dutch television [link], “More likely something with art and design. We’re both very enthusiastic.”
The American artists visited Atelier Van Lieshout in Rotterdam to discuss the collaboration project. “He’s a fan of my work,” van Lieshout said in the television interview. We are greatly looking forward to the process and its outcome! 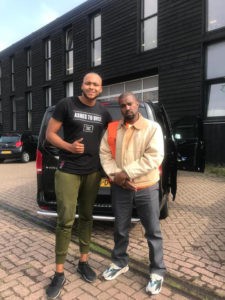