B-girl India Sardjoe is on a roll

India Sardjoe is in top form. In May of this year the B-girl became women’s national breakdance champion and she recently received a wildcard enabling her to take part in the Red Bull BC World Final scheduled to be held in New York in November.

India was born and bred in the The Hague Zeeheldenkwartier (Naval Heroes district). At the age of seven India started football and break, as the style is called in the breakdance scene. “We call a breakdancer a breaker or B-girl or B-boy”, India explains. Not long after, her present coach Ton Steenvoorden happened to walk in during one of her classes and immediately recognized her talent. The football ended up in the attic and the number of breakdance classes was scaled up. “It was simply impossible to combine the two”, India says. She especially likes break’s creative aspect. “You learn existing moves, but you can also invent moves yourself. I don’t really have a signature move yet, but I’m really good at doing the Windmill.” The Windmill is one of breakdance’s basis movements where the breaker is rolling around on the floor, while twirling their legs through the air. Nauseating? “Definitely”, the breaker says with a smile. 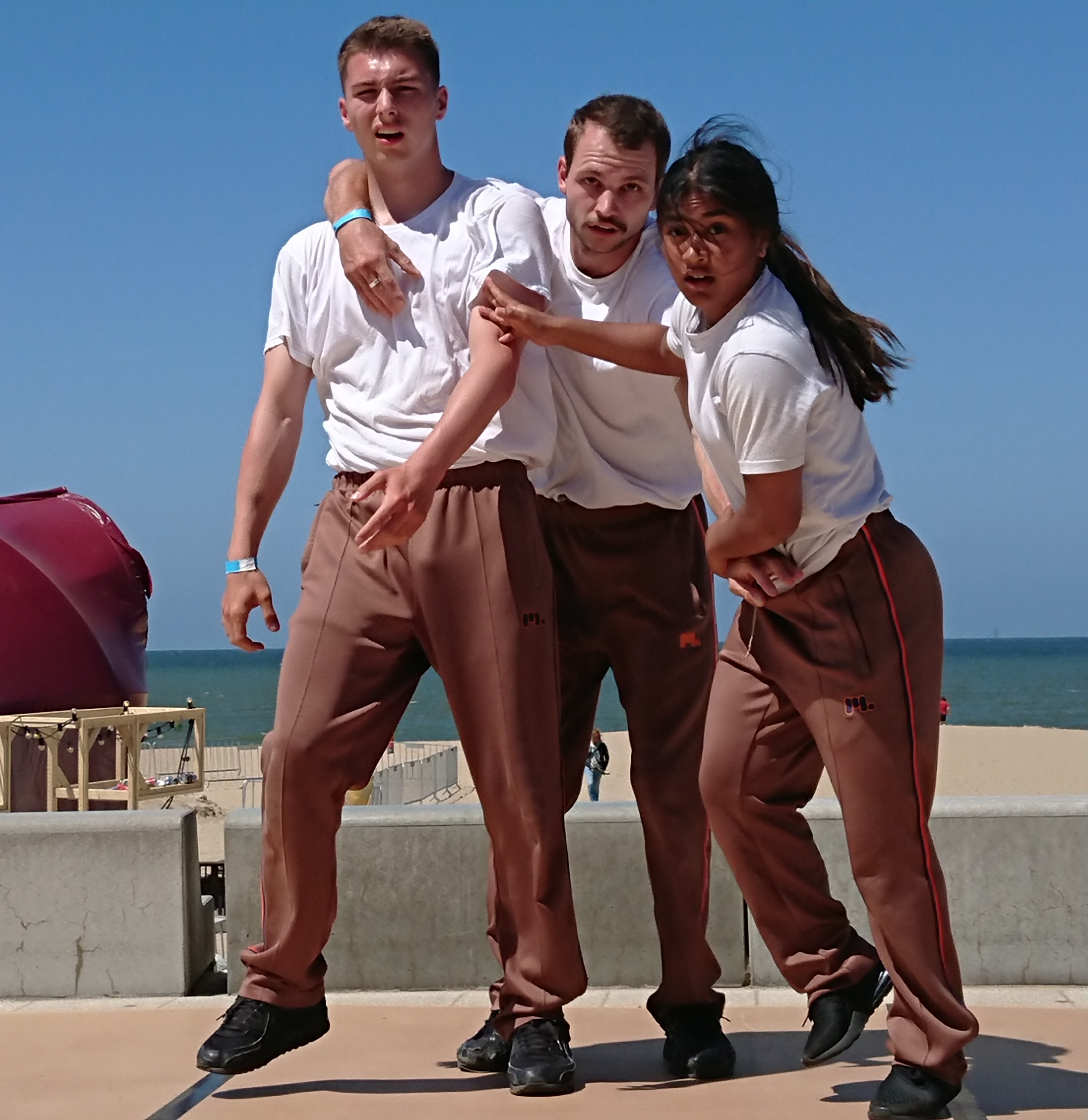 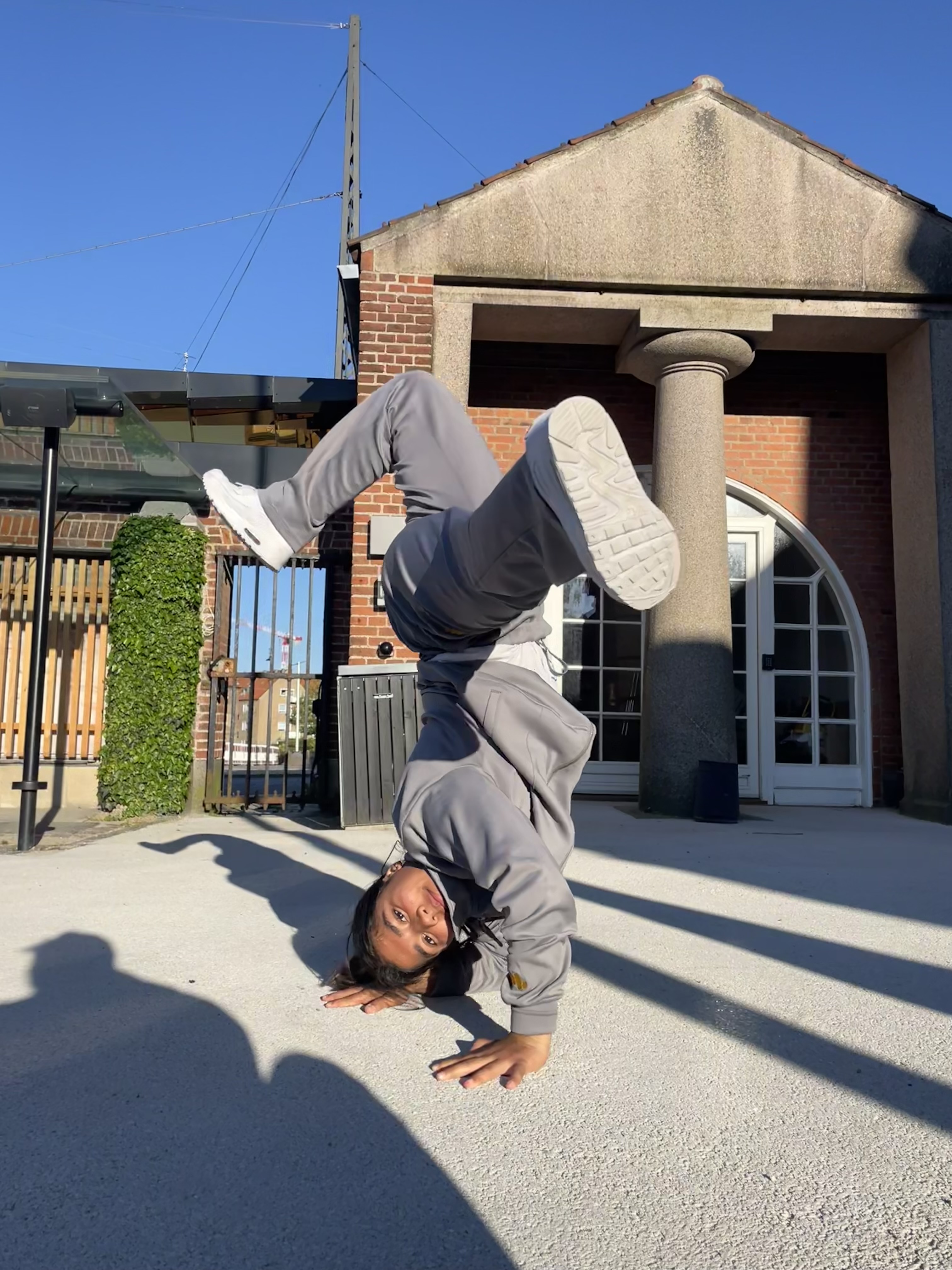 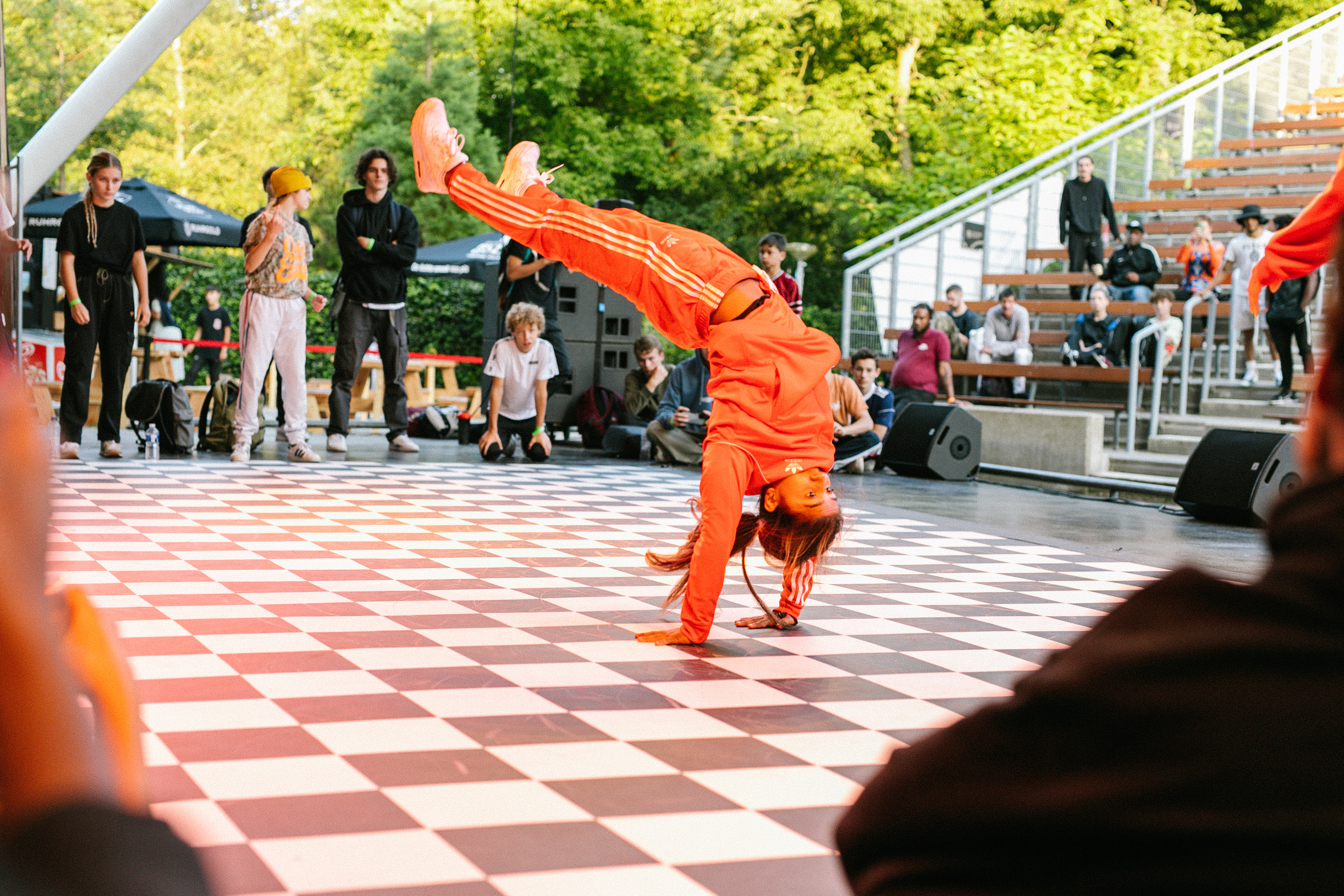 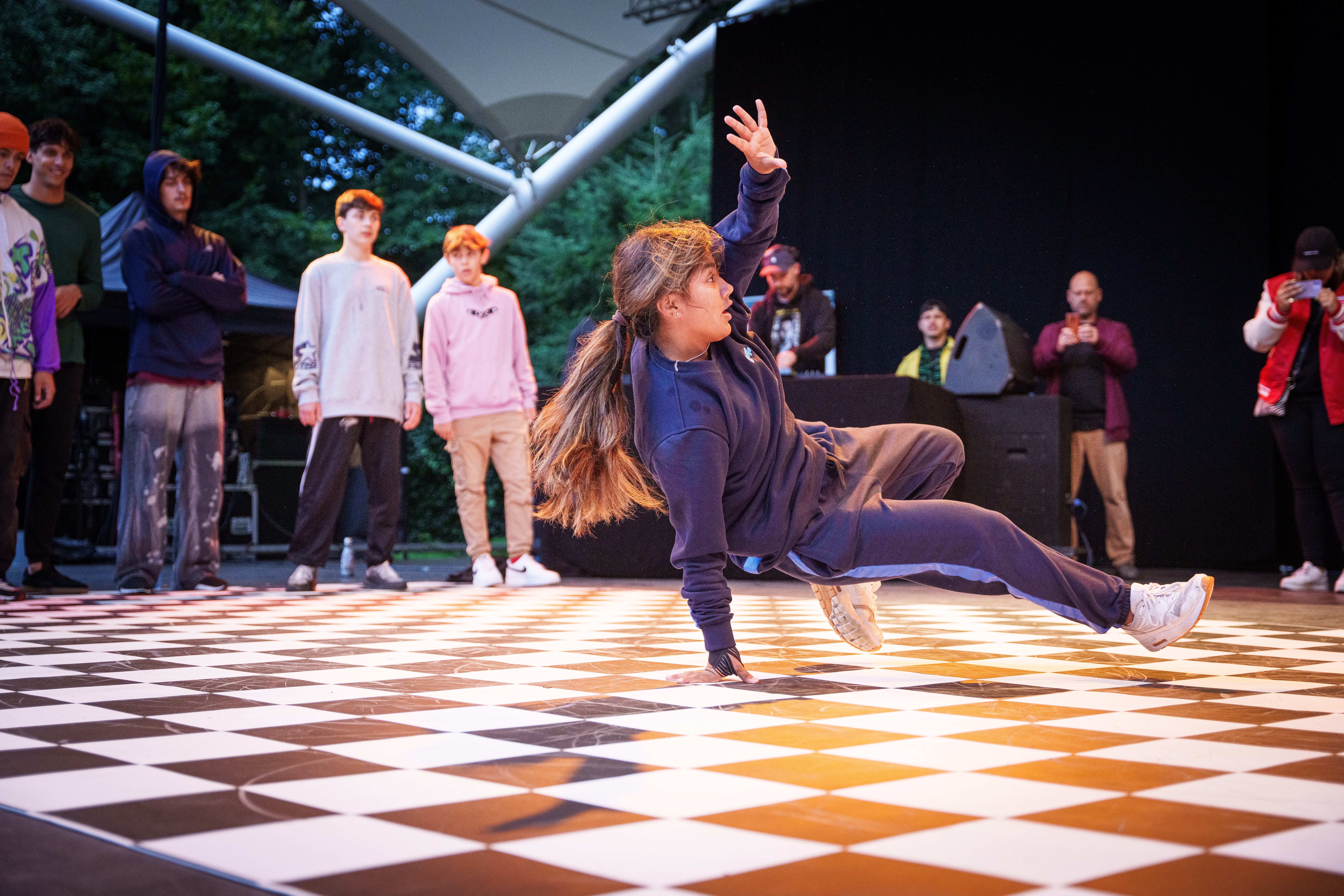 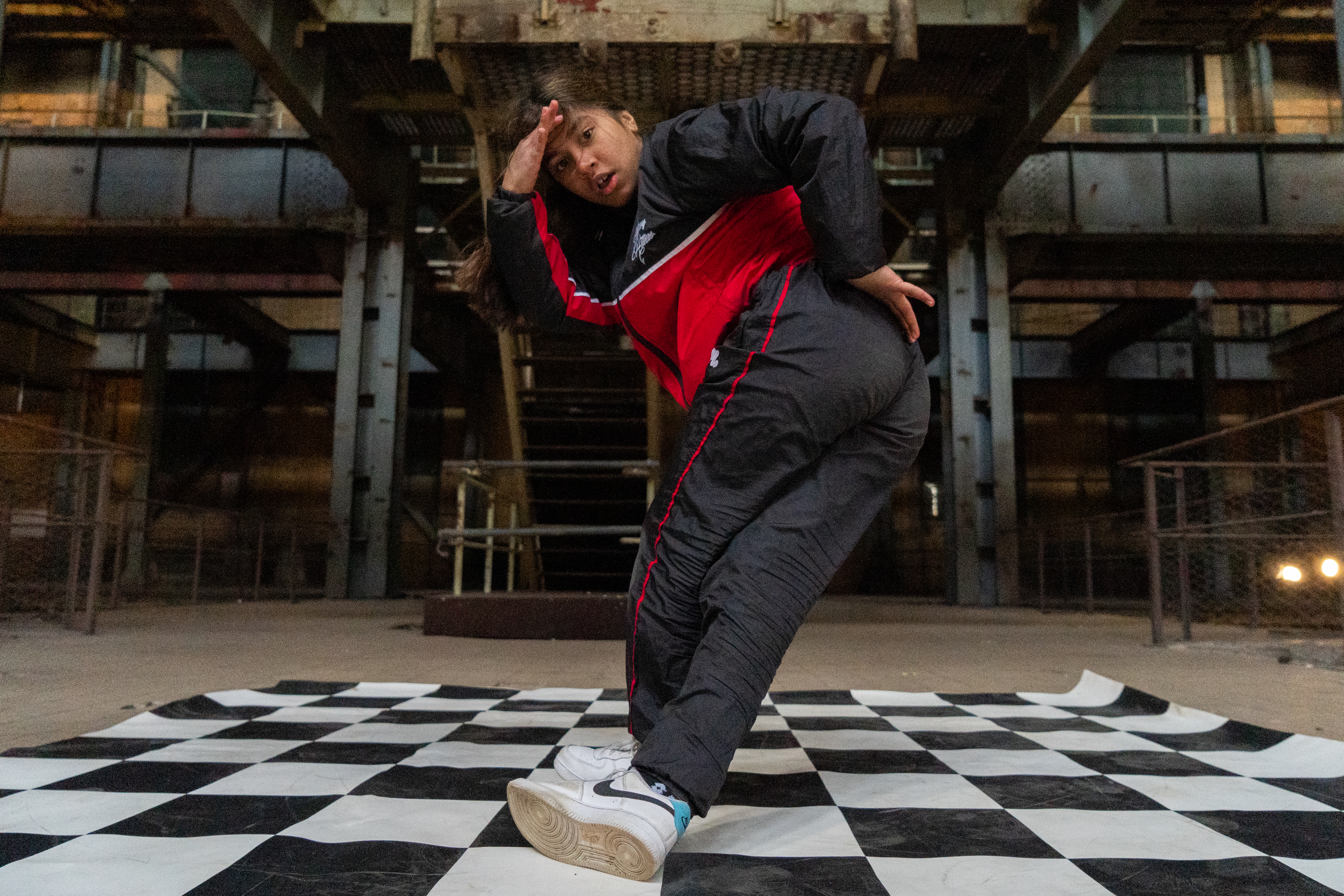 Per week, India has at least three or four training sessions at the Haags Hiphop Centrum or the small dance school of threefold world champion Menno van Gorp in Rotterdam. “It’s no exaggeration to say I’m non-stop working on dance.” During the Covid pandemic it was not easy to find a place to train. “Sometimes there would be an opportunity in Utrecht or Zoetermeer and then I’d go there, or I’d go jogging or train at home or outside.”

Now that India is sixteen she left the kids battles behind and is fighting her adversaries alone, with her crew, or together with other B-girls. India is part of the Heavy Hitters. “That’s my crew. It consists of more than twenty breakers, mostly men and a few women. It’s clear, though, that the number of B-girls has been increasing over the past few years.” India is currently in the top three of Dutch B-girls with the highest number of points. “But I’m aiming for this first place. Levels are high. It’s a challenge, but I think I do have a chance.” Ranking is based on the number of points gained in battles. “There are a, b and c categories. Winning an a-battle gives you most points.” India is trying to get as many points as possible by strategically selecting her battles. “The points of your five best performances count.” Sometimes taking part means paying a fee. “But when you get a personal invitation, your flight ticket and accommodation are paid for by the organizers.”

Apart from the Red Bull World Final, our The Hague B-girl has set her sights on the WDSF Open World Championship, scheduled to take place on 15, 16 and 17 October in South Korea. “I see that battle as the real world championship”, says India. The past year was a roller coaster for the breaker. “One important battle fell right in the middle of examination week. I had to take these exams afterwards.” India is doing the TopSport Talent programme at the Segbroek College in Den Haag, which means her school takes her training and matches into account. “Next year will be my final examination year. I really hope there won’t be too many battles at awkward moments.” India finds school really important. After graduation she wants to continue her education alongside her breakdance activities. “It’s my dream to dance all over the world, but I also need a back-up plan. I’m very much interested in psychology and I think it would be great to help people with problems, but you just don’t know what the future will bring…”

As a B-girl, India chooses to use her own name. Sometimes breakers use a special name; one example is Kid Colombia, who was nominated for the Piket Art Prize in the Dance category in 2016. “My present name is the name people know, so I’ll just be India.” Before battles she’s not, what you would call, a nervous wreck. “But I do feel a kind of rising tension in the week before an important battle. You don’t want to make mistakes, especially when there’s a lot at stake.” India looks back on the past year with satisfaction. “I’ve become Dutch B-girl champion; I’ll be going to the Red Bull World Final. It’s been a year with a lot of good news.” And the year isn’t out yet. The next stop is Outbreak Europe in Banská Bystric in Slovakia (4–7 August), a b–battle. India will also be dancing at The Notorious IBE festival in the Heerlen city centre (12–14 August). And in early October she’ll be taking part in an important match in Antwerp: Unbreakable. But she’ll also have the opportunity to relax this summer. “The Heavy Hitters are doing an exchange with a crew from Bern in Switzerland. We’ll be going there for a few days in late August.”