The Piket Art Prizes in times of corona (17): Elias Boersma

Until 1 June theatremakers, actors, artists and dancers are forced to sit at home. As part of the official measures aimed at keeping the spread of the coronavirus under control, exhibitions are off and performances have been cancelled. What do these measures mean for Piket Art Prizes’ young artists? Part 17: Elias Boersma.

Elias Boersma, 2018 nominee in the Dance category, had quite different ideas about his first season at the Swiss Ballet Basel. Between mid-March and mid-May he was unable to work because of the corona virus. “I live just across the border in Germany,” he says. “Fortunately me and my girlfriend Eva Blunno, who also dances with Ballet Basel, were able to go outside. But everything was closed, except for the supermarkets. It’s a good thing we have two small mountains near our home, where I took regular walks to stay in shape.” There also were online ballet classes. Elias joined the Swiss company in August, just after he had graduated from the dance department of the Royal Conservatory in The Hague. He had also done an internship with the Rotterdam Scapino Ballet. “At first it was rather a shock. Things here at Ballet Basel are quite different from what I was used to in the Netherlands. I really have to work hard, but it’s all worth the effort. I very much enjoy being here.” Elias had hardly settled in Switzerland, when he received the Incentive Award of the Stichting Dansersfonds ’79. “Unfortunately, I was unable to attend the awards ceremony because of a première, but the prize was really cool, because I had only just finished my training.” 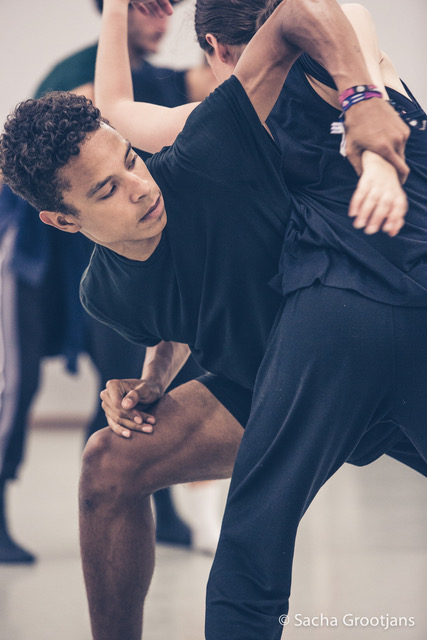 On 11 May Ballet Basel’s dancers returned to the studios for rehearsals. “Only five people are allowed in one room at a time, including the repetiteur and the pianist,” Elias explains. The company has been split up into small groups. About eight dancers have been selected to work on a choreography of their own. “It’s great we’ve started again. Online classes are nothing like the real thing.” As far as the rest of the season is concerned, performances have been cancelled. Gloria, which would have its première this season, has been postponed until autumn. “It will probably be November,” Elias says. He spends a lot of his time in Germany. “The German classes I took in secondary school come in quite useful now. People are nice here. Basel is a beautiful city, but rather expensive. This is the main reason I live just across the border. Life is cheaper here.”

Apart from rehearsals for Gloria, there are plans for a special performance to celebrate the twentieth anniversary of artistic director Richard Wherlock. “I expect we’ll hear more about this after Gloria has had its first night.” Ballet Basel has given Elias an annual contract. “I’m really pleased with that. It’s a very nice company, so I would like to stay for a while.” Sometimes Elias is a little homesick, though. “I miss my family and friends and Dutch food, especially Dutch cheese. German cheese really isn’t tasty,” he says with a smile. “But when I’ve three or four days off, I fly back to the Netherlands. It’s only an hour from Basel!”