The Piket Art Prizes in times of corona(19): Inge Aanstoot

Until 1 June theatremakers, actors, artists and dancers are forced to sit at home. As part of the official measures aimed at keeping the spread of the coronavirus under control, exhibitions are off and performances have been cancelled. What do these measures mean for Piket Art Prizes’ young artists? Part 19: Inge Aanstoot.

During the first week of the ‘intelligent lockdown’ Inge Aanstoot, 2014 winner in the Painting category, was still working hard on a mural for the exhibition Leeuwen op de Coolsingel (Lions on the Coolsingel) at the Timmerhuis/Museum Rotterdam. “I’d been given nine days to complete it. It was quite a job – the mural’s dimensions are 2 x 8 m! As I was working, I was listening to the radio, all these figures about infections and deaths…”

Usually, Inge takes one or two weeks off after a big project to find new inspiration. “I take walks, or go to the zoo or to a museum. But that was impossible now. I had to find a new rhythm. The hard thing these days is not to be able to do something spontaneous. At the start of the corona period, I did a lot of informal care, such as doing the shopping for friends who were ill and serenading people who had their birthday.” Fortunately, Inge had managed to build a financial buffer just before the virus reached the Netherlands. “I had just sold a lot of work via a small-scale sales exhibition.” 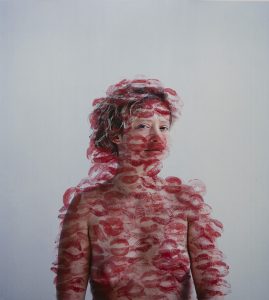 Work by Marie Pop: Feu / Light it up. Photograph by Janine Schrijver

The exhibition Lions on the Coolsingel, about Rotterdam during the Second World War, will be on view until 16 May 2021. “In addition, I’m planning a sculpture. It’s not what I usually do, so I’m not sure what it’s going to look like,” Inge says. “I only made a sculpture once before, in Germany during If Paradise is Half as Nice (IPIHAN). It all ended in a curious museum with display cases made of old windows. I like being inspired by strange collections.” Apart from the Contour Gallery project, Inge has no real exhibition plans. But she isn’t worried: “I’m glad to be healthy.”