Peter Zwaan (1968), who made this year’s Piket award, graduated from the Royal Academy of Arts in 1992, and lives and works in The Hague. He was also the winner of The Hague art prize: in 2014 he was awarded the Jacob Hartog Prize, Pulchri Studio’s ‘spring prize’. Peter’s involvement means the Piket award is really ‘in Hague hands’.

In fact, the sculpture Peter created for Piket is all about hands. His work frequently refers to the human body in a surrealist manner, as was also evident from his recent solo show, Skins, at HOK Gallery on the Mauritskade. It didn’t take long for him to decide that the hand would be his point of departure. “The hand is the pre-eminent means of expression in any form of art”, he says. ‘The hand is the visual artist’s tool and the performing arts have expression through gesture.’ In his view, his sculpture also symbolizes grasping, taking hold. “An artist attempts to capture something, a feeling, an idea. Your own work can be elusive – is this really what I want to show, or am I not there yet? I also wanted to refer to the Piket Art Prize as a helping hand, and when you look at the sculpture from a certain angle, you can see the letter P.” 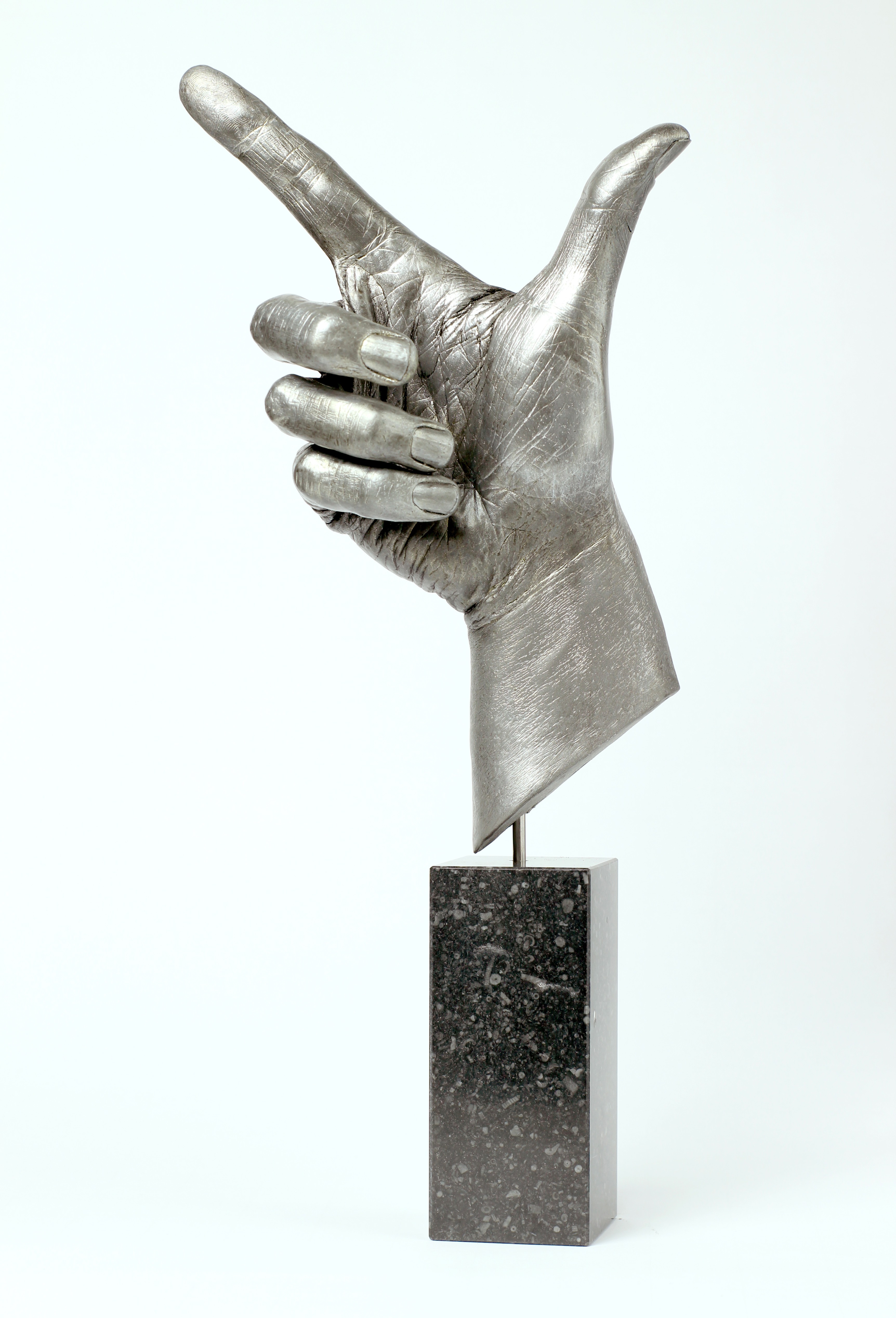 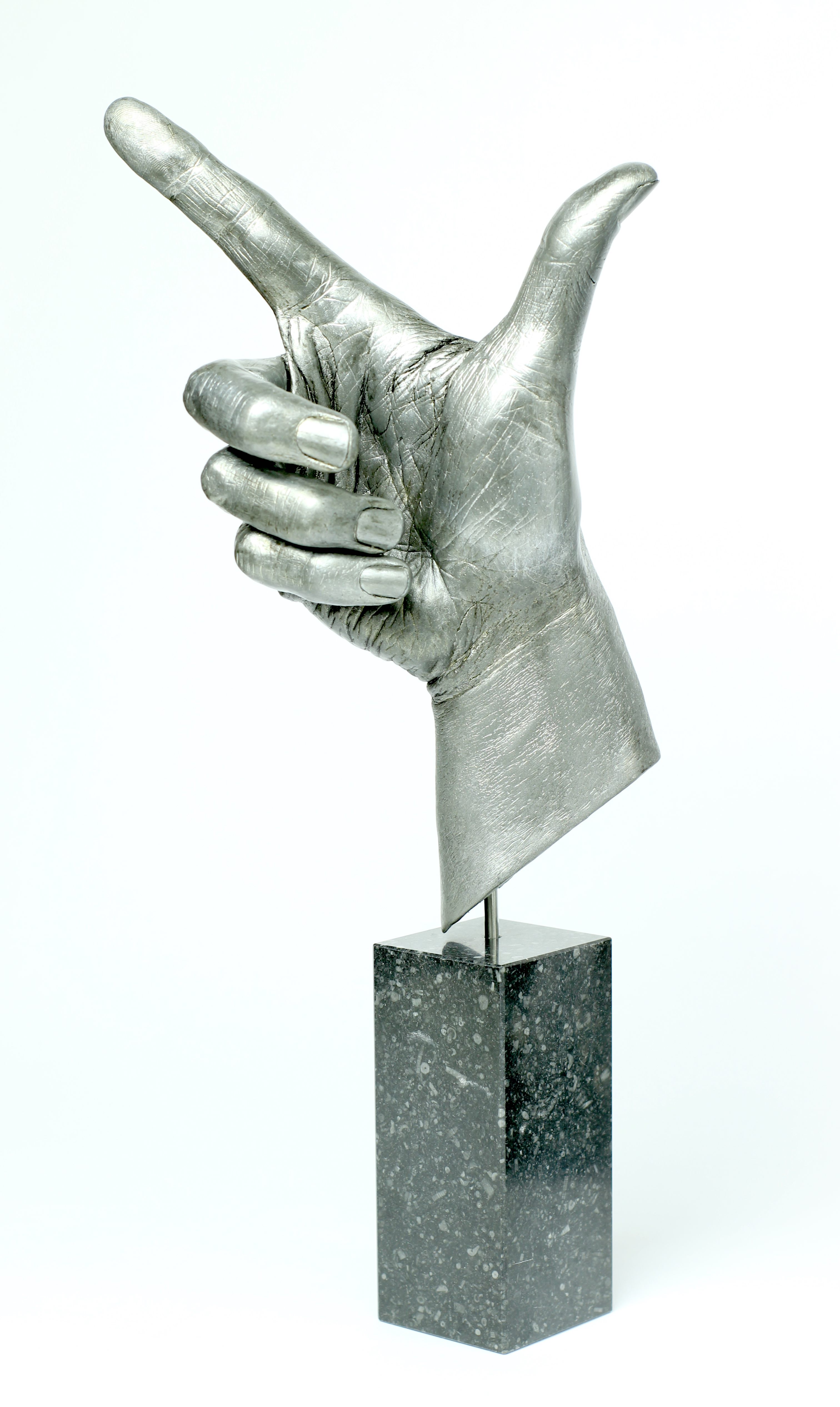 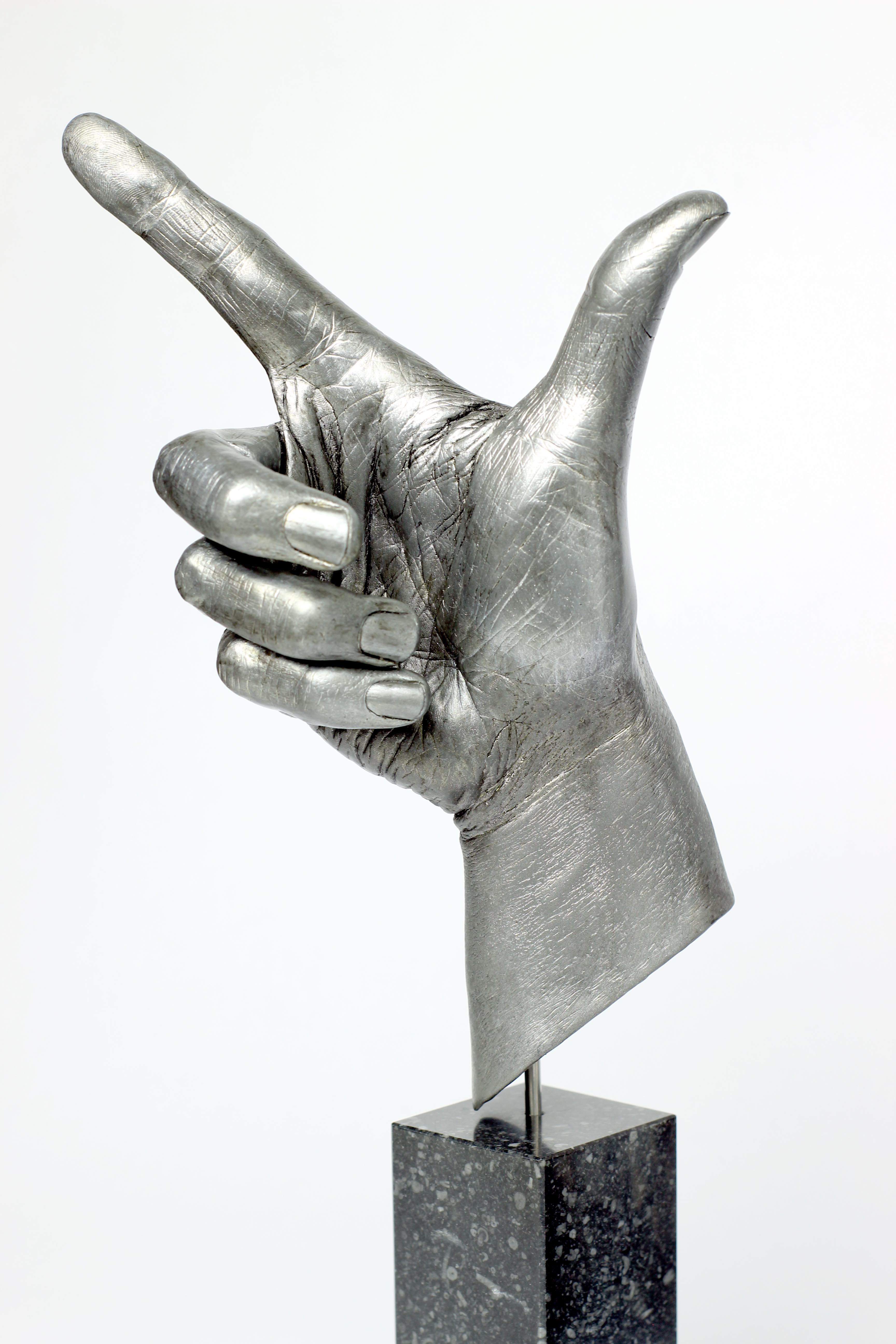 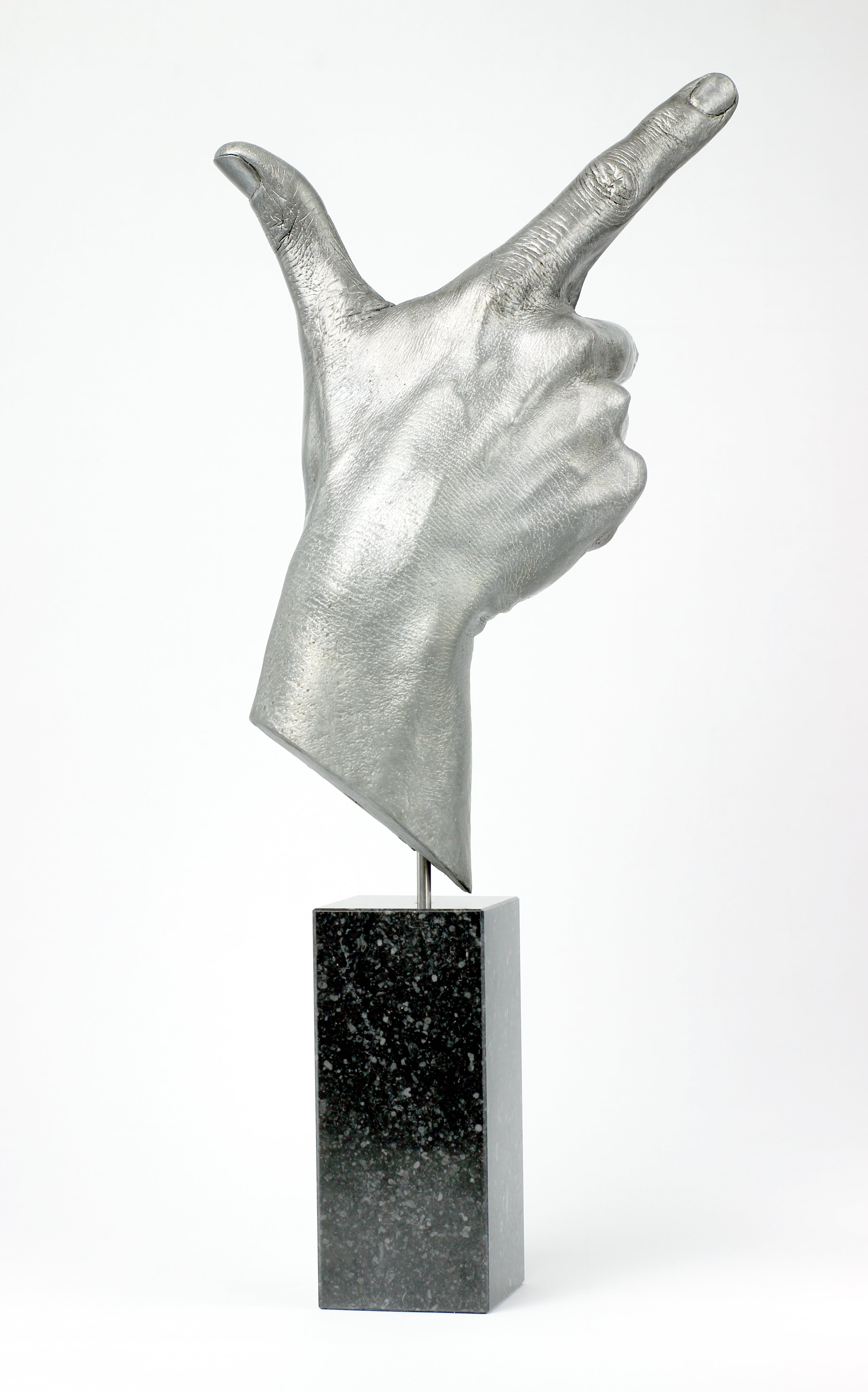 For the television programme Radar, Peter created the Leaden Lion, the prize for the most exasperating television commercial, awarded annually since 2002. In that case, however, he was only responsible for the actual realization of a statuette based on a computer animation used in the programme. The sculpture he created for Piket is the first trophy he designed himself. 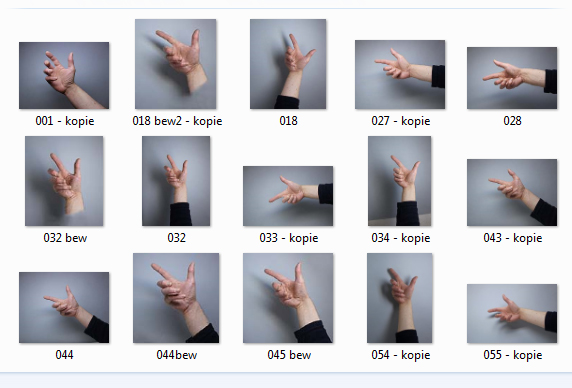 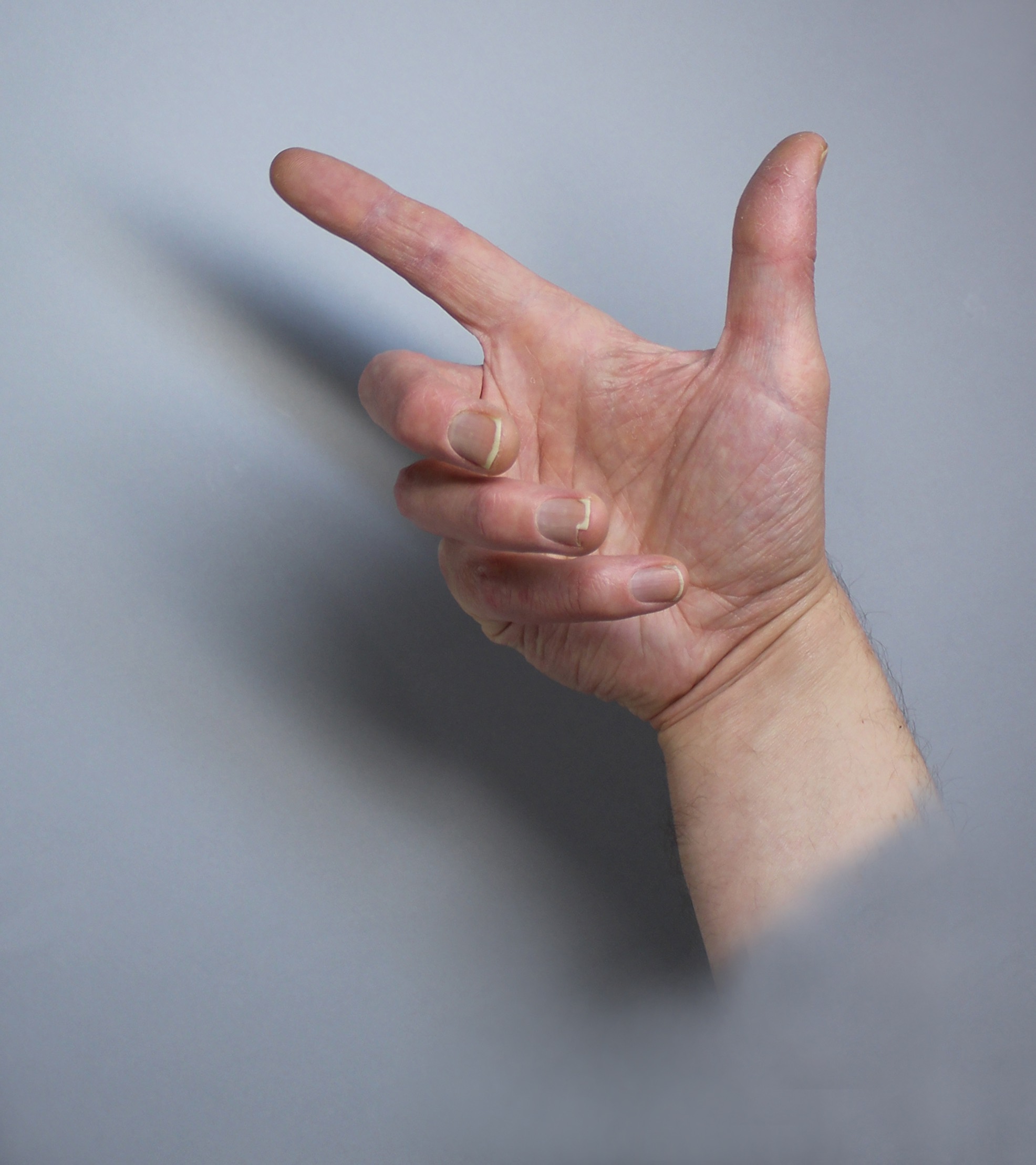 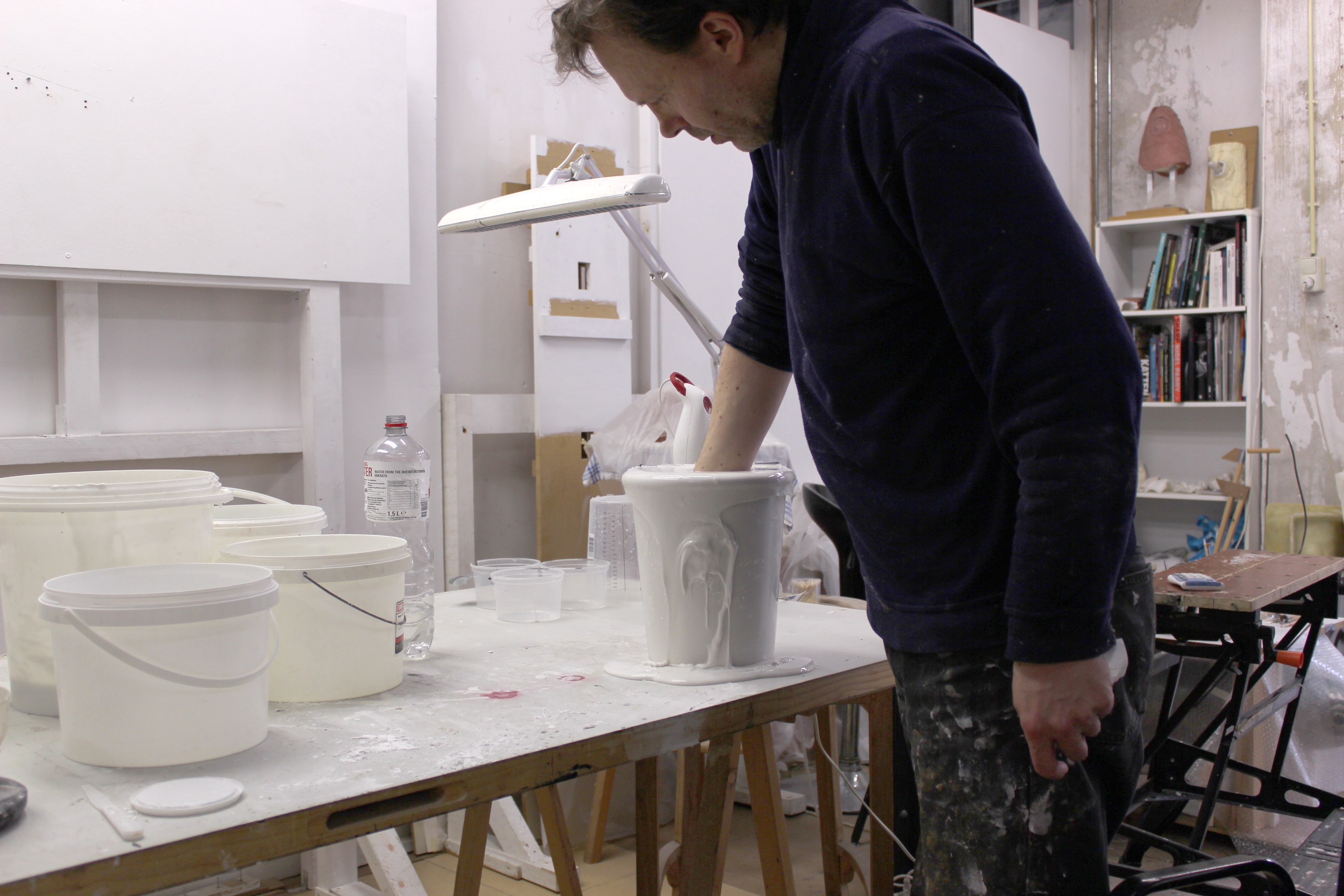 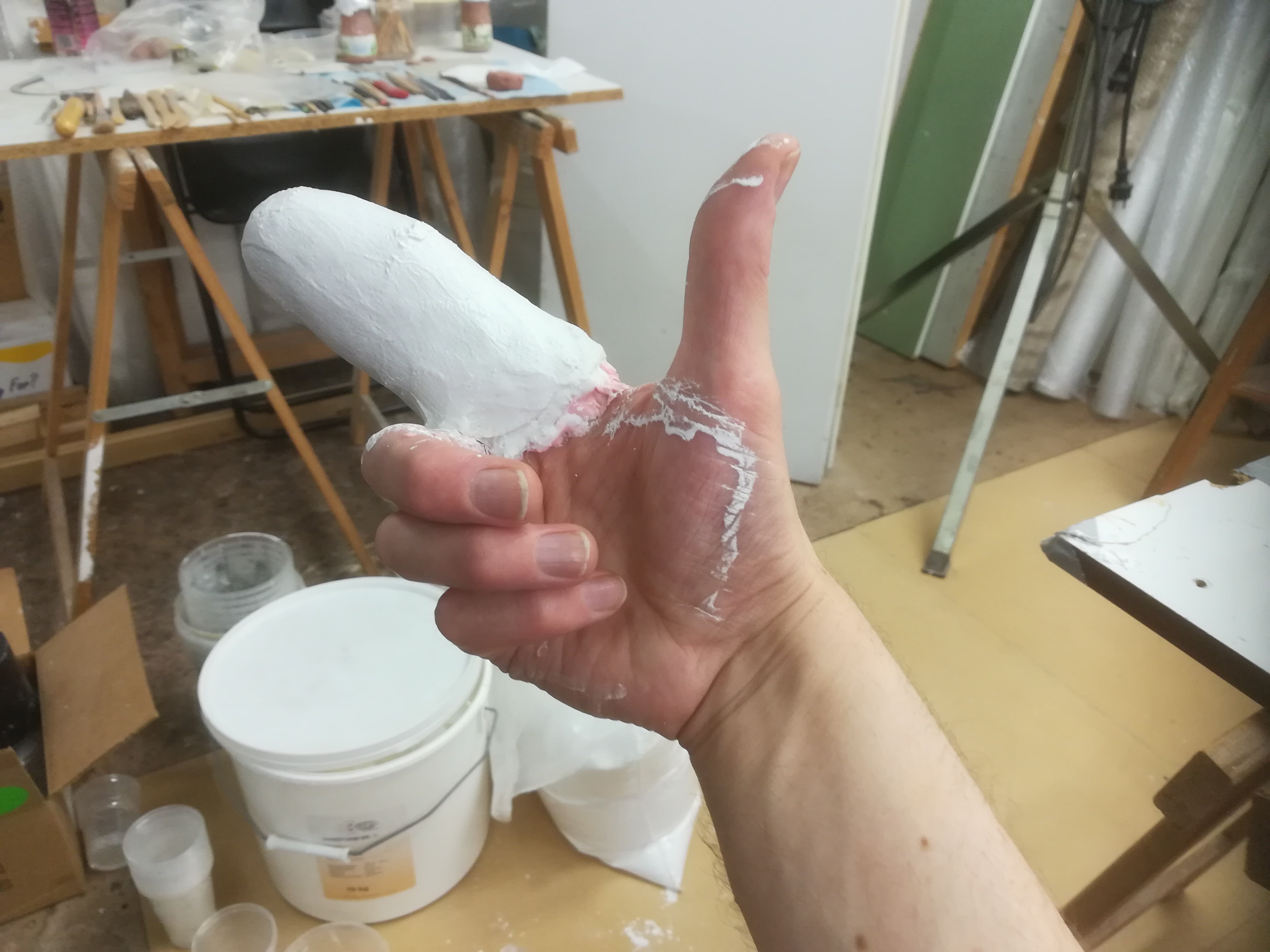 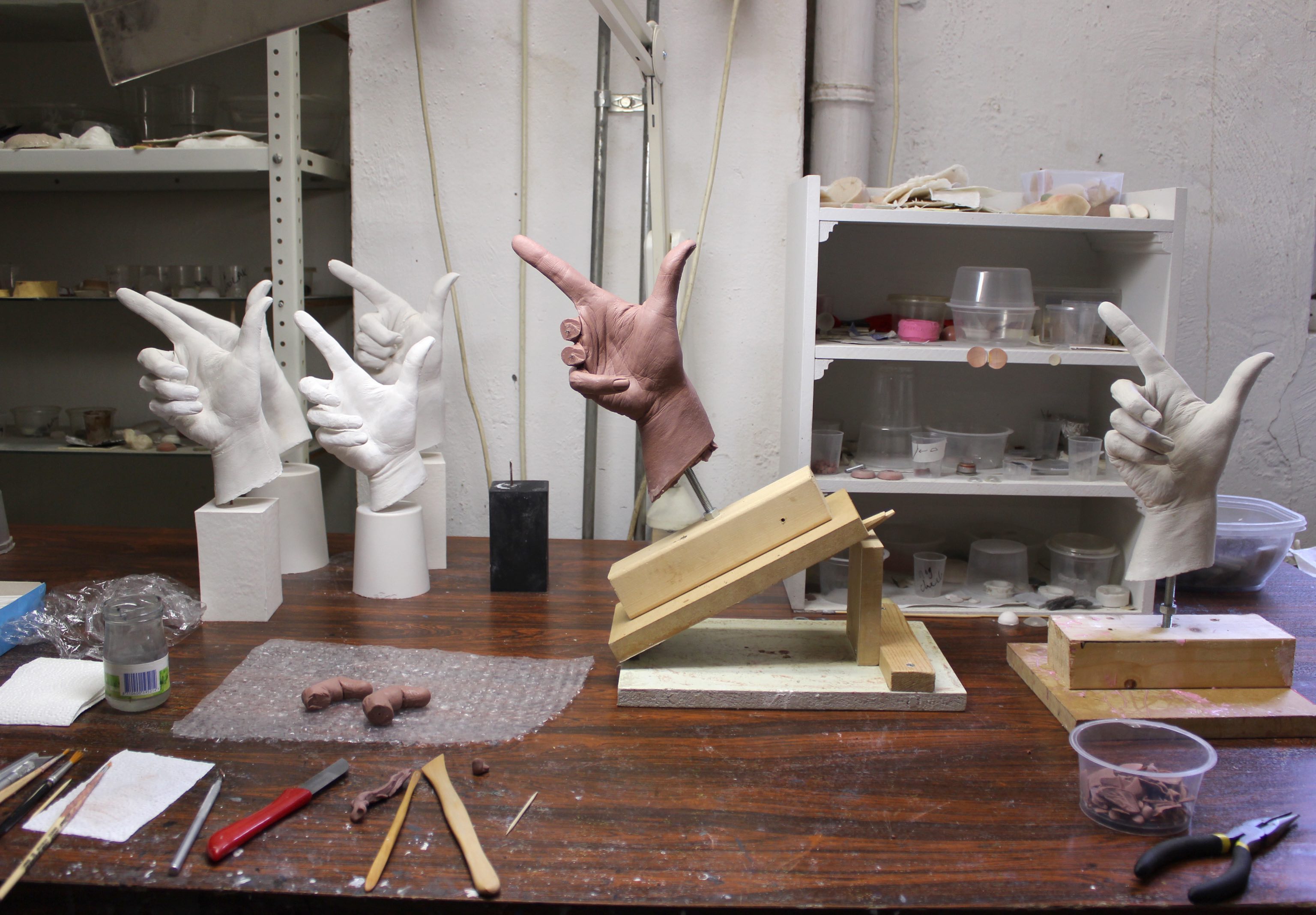 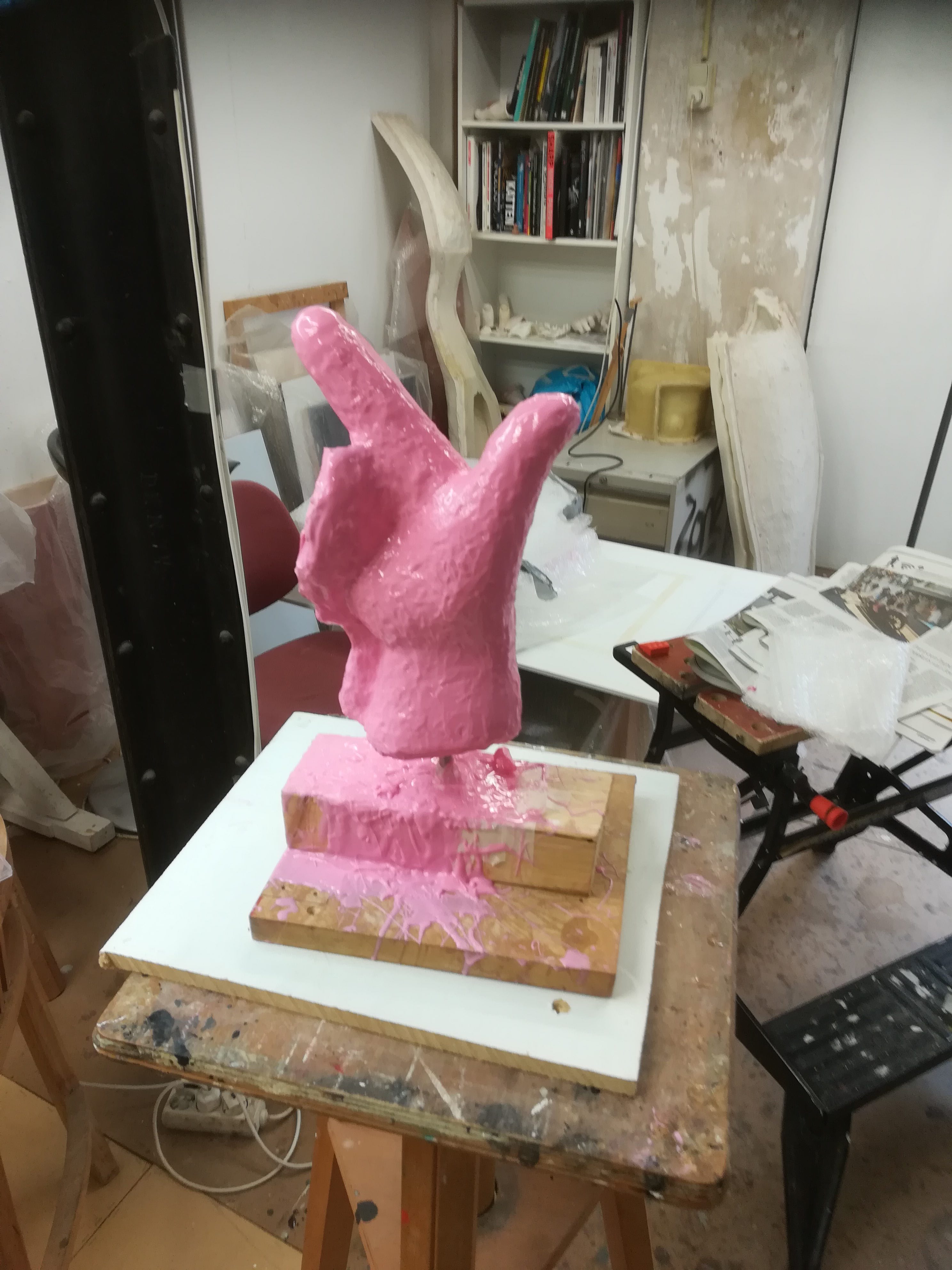 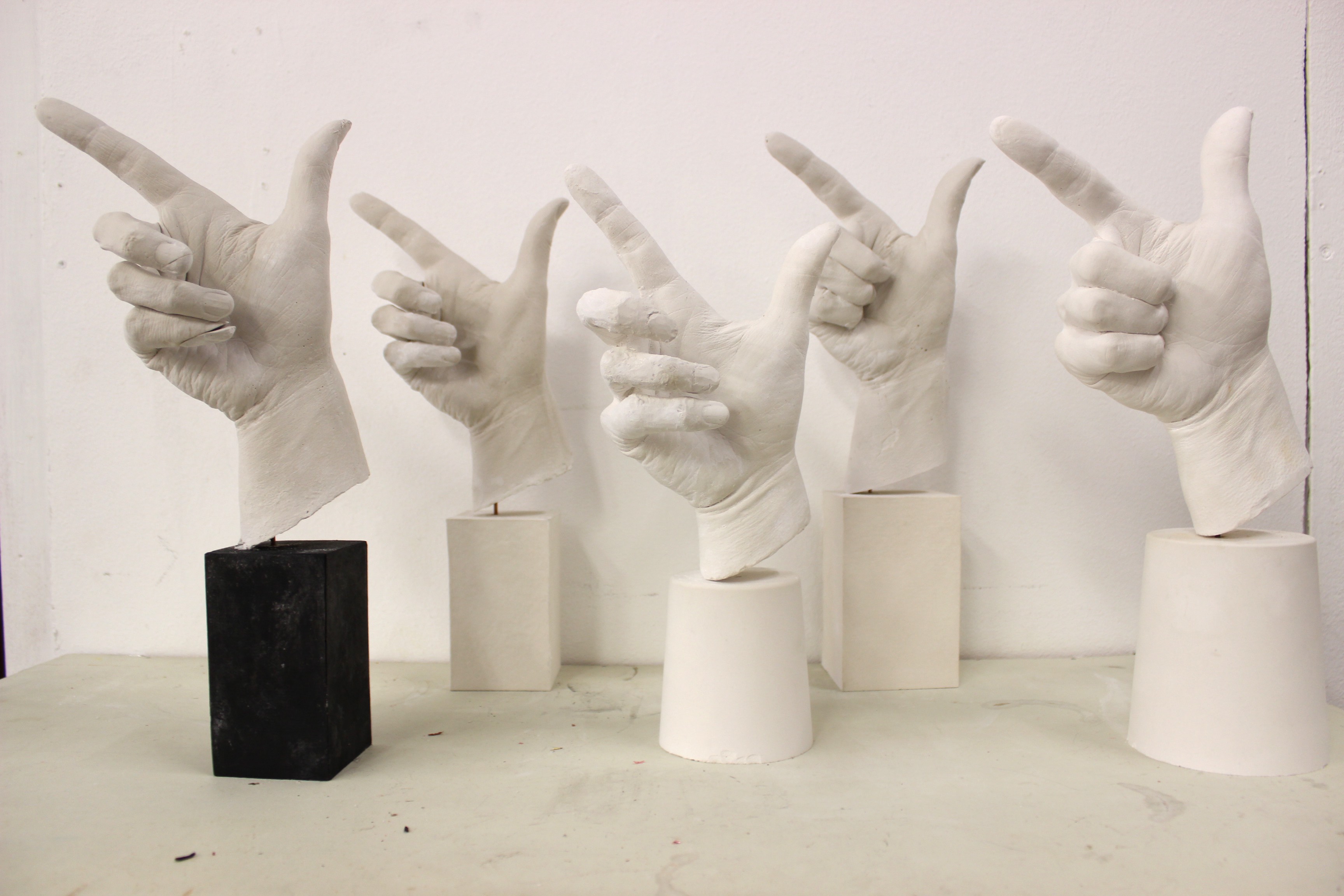 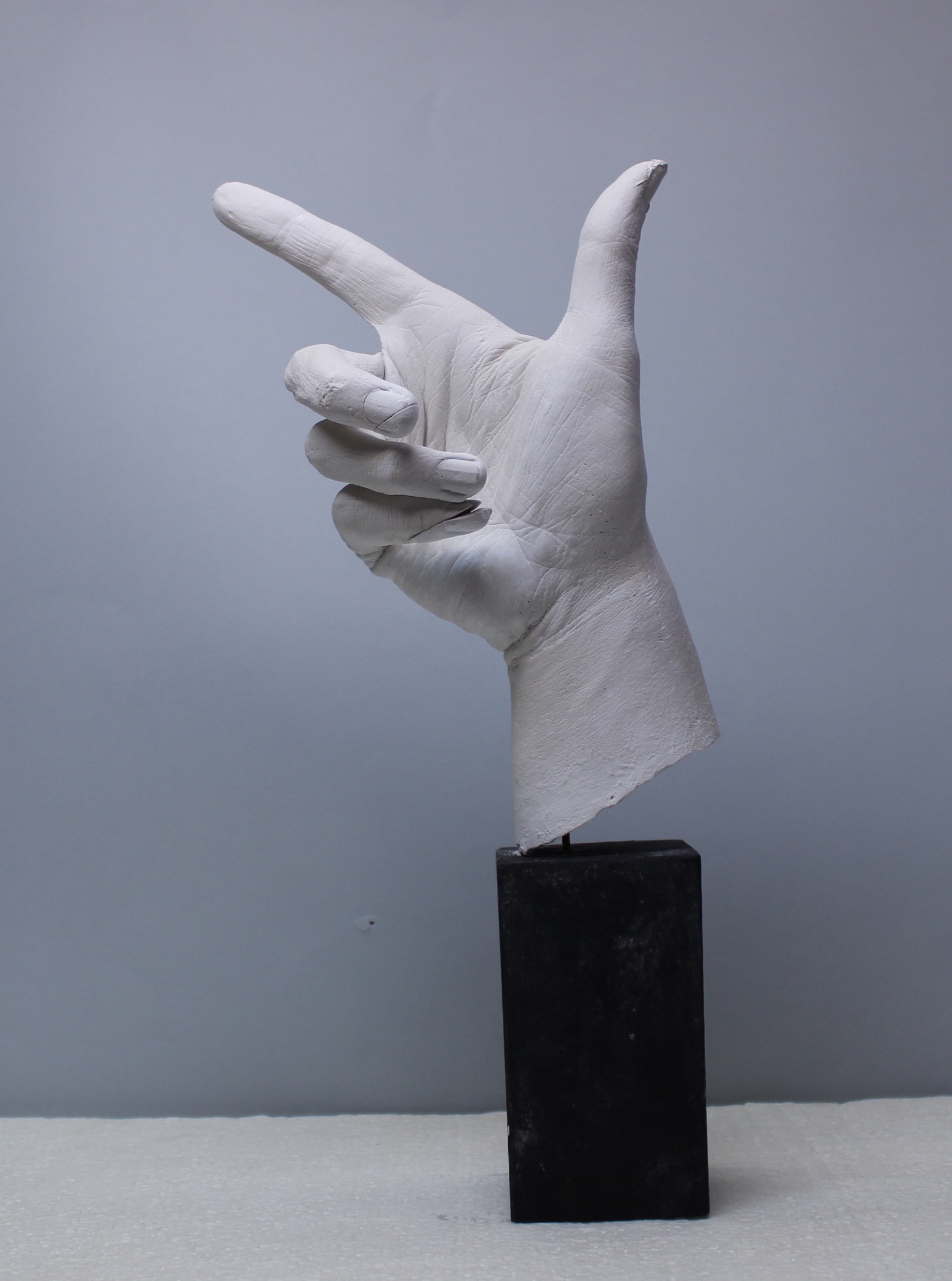 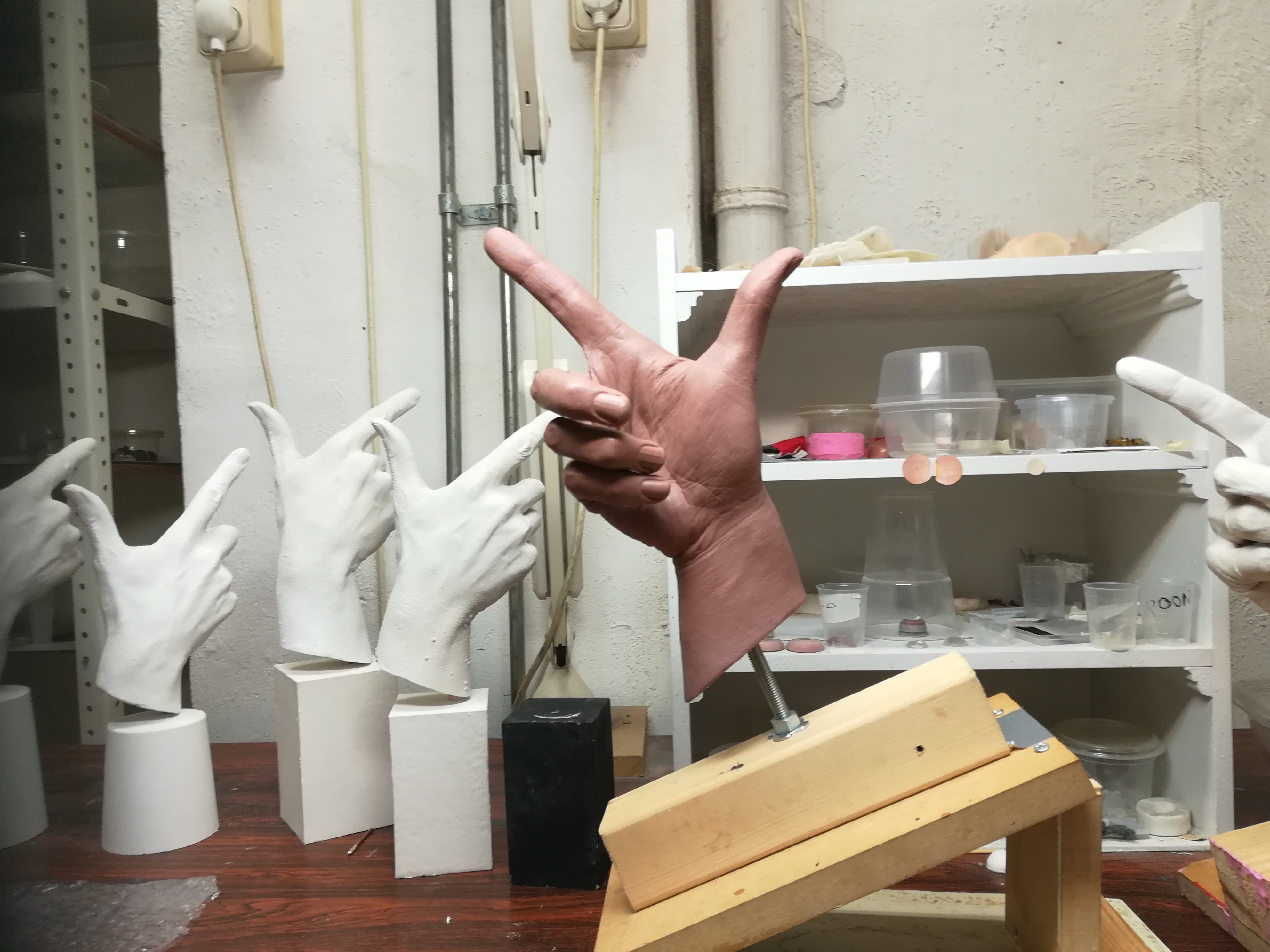 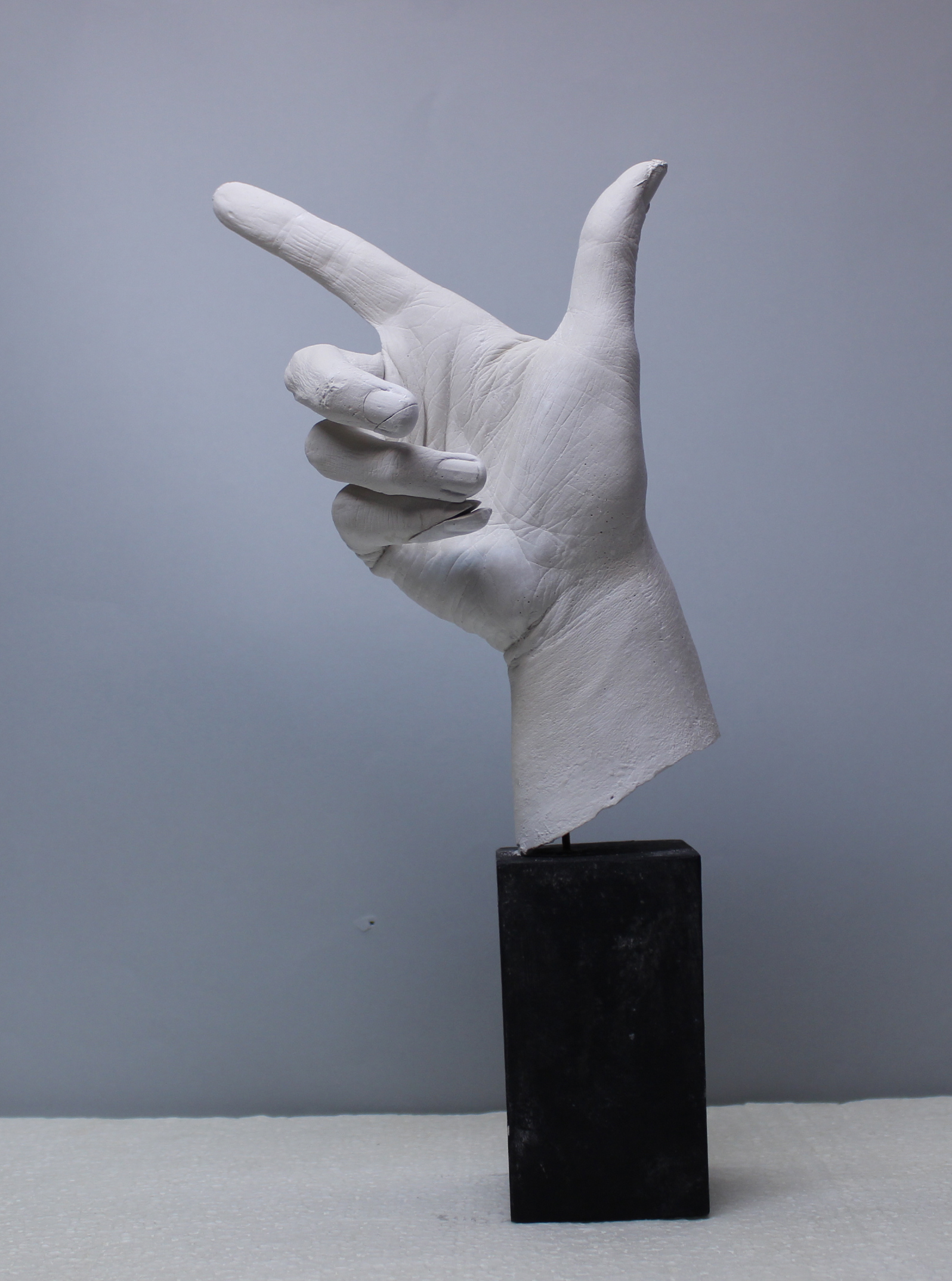 For the Piket award Peter made a number of moulds using alginate, a powder that turns into a rubbery jelly when mixed with water. The hand is his own. He used the version he liked best to make a plasticine model. Plasticine is a putty-like modelling clay that enables you to create fine details. He subsequently used this model to create a silicone mould, with which he made a cast in a synthetic material mixed with metal powder. “When you start polishing and finishing, this metal powder will produce an interesting structure,’ he explains, ‘and the metallic aspect also makes it look like a real trophy.” The sculpture ends in a kind of wedge, which gives it balance and dynamism. The pointing finger cries: ‘It’s you!’, and everyone is familiar with the thumbs-up gesture. The runners-up version is slightly smaller than the winners’ award.

Peter perfectly understands what a Piket Art Prize means to a young artist. “A prize is not merely a token of recognition and confidence”, he says. “Producing art costs money and such a prize can make all the difference. All of a sudden you can buy this material you could never afford, or create something in a size you could earlier only dream of. Naturally, I am speaking from the perspective of the visual artist, but this doubtlessly also holds true for other art forms.” 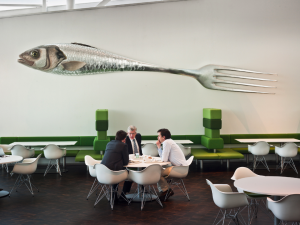 Peter did quite a lot of commissioned work. His 2011 Forkfish became an icon. He created the object – more than 7 meters long! – for the staff restaurant of the Netherlands head office of Deloitte in the Maastoren in Rotterdam. “Every artist is delighted to receive a commission”, he says. “It provides you with an opportunity to create something and enables you to carry on. It’s always a challenge, but even when a commission seems less than ideal at first sight, it may be a good thing to step out of your comfort zone. But it’s your free work that gives people ideas and determines what they ask you for. So keep making time to do the things you are curious about and find genuinely important.” 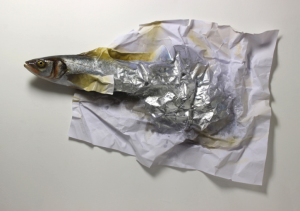 ‘Keep doing what you find important’

A constant feature of Peter’s own work is an alienating blend of elements from totally different environments and circumstances. The images he creates sometimes remind us of Hieronymus Bosch: an apple with a human skin, a fish emerging from a piece of paper. The exploration of this ‘unreality’ appears to be an inexhaustible source of inspiration for him. He advises young artists to have faith in their own abilities and instincts. “Of course I’m not the first to says so”, he says with a grin, “but it’s true. When you’re doing well as an artist, there are all kinds of opportunities. But if you don’t want to lose your mind, you must always return to the things you really want to make.”